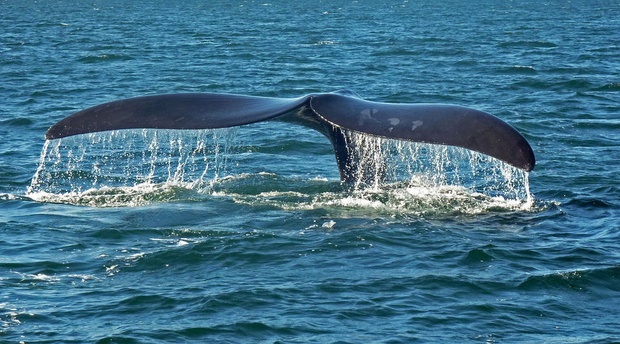 Three research scientists (Edith Mertz, Bridget James, and Monica Betts) working on the Mossel Bay Cetacean Project – a project of the Mammal Research Institute of the Department of Zoology and Entomology at the University of Pretoria - spent a total of five years from 2011 monitoring the marine mammals in Mossel Bay and Vleesbaai.

Using surveyor’s theodolites, they were out there at various observation points along the shore, five days a week, accurately plotting the position of the animals they saw in order to create a continuous record of the movements of whales and dolphins in these waters.

And from everything they told us - there are many more whales and dolphins in Mossel Bay than anyone had realised.

Local residents include Indo-Pacific bottlenose dolphins  and humpback dolphins, long-beaked common dolphins, and Bryde’s whales, (it’s pronounced brew-diz) while killer whales (orcas) are sighted at various times throughout the year, and the migratory whales - humpback whales and southern right whales - visit in winter and spring to mate and calve in the shallow, protected waters of this part of the Garden Route Coast.

This is an especial attraction for walkers on the Oystercatcher Trail - which follows the Vleesbaai shore. Since Vleesbaai attracts no commercial shipping, it’s particularly safe and quiet for whales and dolphins, and they know it - and they’ve reward us with countless amazing sightings over the years.

Imagine sitting by an ancient midden high on an untouched dune on the beach, - the same place where our ancestors enjoyed their seafood dinners over thousands of years - and as you stare lazily out to sea, a humpback whale suddenly breaches! And then another one does, too! And another!

Or consider what it might be like to have a school of hundreds of dolphins surfing the breakers alongside you as you walk along that endless beach...

... And consider that we’d love to help you experience moments like these!