The Guides must be crazy: Elephant Scared I 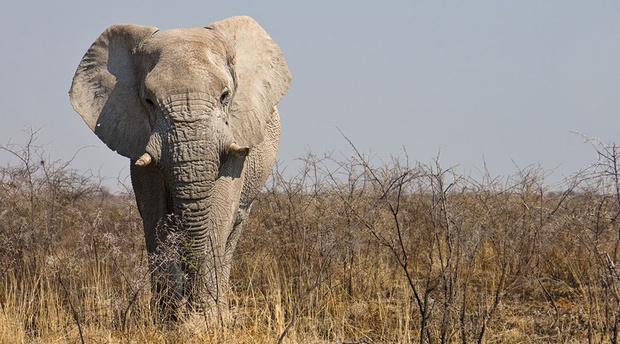 In which Frik Orban meets a smelly ellie in Kaokoland - Northwestern Namibia (circa 2002). "The local camp manager told us rather not camp under the big Ana trees next to the Hoaruseb riverbed, as there were some less than friendly young desert-adapted elephant bulls around. Their favourite eating spots were at these trees."

We had been driving for 5 days, of which the last 3 days were on virtually non-existent roads and in dry river beds. Myself with 6 German tourists in an extended Land Rover.

We eventually reached the campsite of Purros, in the days before any facilities.

The local ‘camp manager’ told us rather not camp under the big Ana trees next to the Hoaruseb riverbed, as there were some less than friendly young desert-adapted elephant bulls around. Their favourite eating spots were at these trees.

Moving away from the trees everyone set up their little dome tents. During a typically stunning desert sunset enjoying sundowners I explained the following to our now burnt-pink guests: shower now, pee now, do all you have to do outdoorsy now. Once it is dark, we will be around the fire and afterwards off to your tents. No moving around, now fanny-ing about. Lions and elephants!

I could see the ‘Ja Ja Votever’ on their faces. We had not seen a single elephant or lion on the way here.

After a lekker braai dinner over the flames, I gave them a final warning. Pack away any fruit, veggies, anything that smells like food…and do not, do not get out your tents tonight. Should you need to pee, open the tent zip, look around and pee right outside.

In true African guide windgat style, I unrolled my bedroll on top of the Land Rover roof rack, climbed on top and went to bed watching the stars…stunning!

Somewhere in the late night, early morning hours, something woke me. I wasn’t sure if it was a noise or movement. I was still deuriekak asleep/awake. Eventually I opened my eyes. No other part of me moving. It was dark and very smelly…

I swiveled my eyes right…and staring at me was the biggest eye, with the longest eyelashes, I had ever seen…half a meter from my little eye.

I can still recall that overpowering smell.

By now I wasn’t sure if the smell came from me, or from whatever this massive eye belonged to.

Realizing that it was a male elephant staring at me, and that if the smell is not from me, I was still in big poo! A young Bull Elephant (desert-adapted elephant nogal), in Musth, is not a happy big Dassie! Needs to have sex and then mostly has to fight other young angry ellie teenagers for it, as well.

So there I’m lying, eye to (huge) eye. Not moving…both of us. It seemed like forever - probably only 30 seconds.

And now I’m thinking ”Oh please let none of my guests get up for a pee now”. Because if that tent zip starts zzzzzzzzzziiiipppping now, this elephant will attack whoever comes out of that tent.

Still nothing, just a staring issue…

Until Big Billy decided that now he wants to taste or smell what’s on top of the Landy. Not pleasant being felt up by another male, with a massive appendage and a crap attitude.

Priorities were starting to change in my mind. My ‘…will protect my guests at all costs…’ mantra was starting to fade a bit.

Suddenly not being the biggest man in town anymore, is kind of like having your nose punched during a brawl…suddenly there is not such an absolute willingness to carry on. There I find myself (while being fondled by an elephant trunk) thinking: “Oh please let one of THE guests open their bloody tents and go for a pee NOW!!”

Eventually Cousin It left me and wandered off into the night without killing a guest and only managing to hurt my pride and make me change underwear during the night.

The next day I tried to regale (some) of the events to my guests but was met with a few “Ach so…ja ja…wirklich?”s.

That is until I showed them the tracks on the ground. It changed then to “Mein Gott, Afrika isst ja aber Gefährlich”.

You know nothing Sunshine! :)