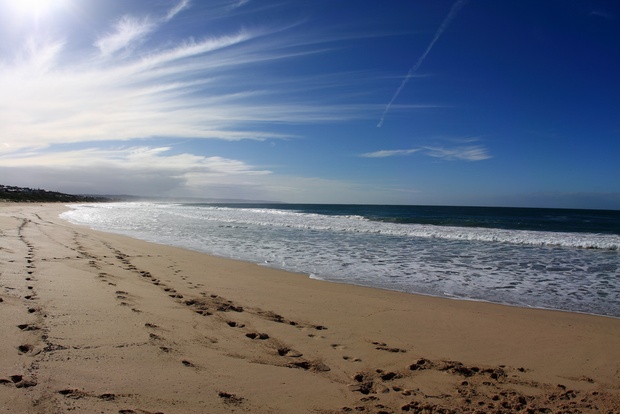 There's a reason why most people have never heard of Boggomsbaai, despite a perfectly legible signpost on the N2. That reason is a 20m high, flaming metal monster, otherwise known as PetroSA.

Travellers approaching Mossel Bay from the west are looking only at the apocalyptic gas flare shooting from a titanium spaghetti of pipes and chimneys that is South Africa’s national oil and gas company. They do not see the undulating farmlands of the southern Cape, or Robinson Pass (ever heard of that? Now you know why), or the turn-off to Boggomsbaai.

But a world of surprises awaits those who see beyond the parastatal eyesore on the N2 and venture onto the P1532, gateway to a stretch of coast that is finally getting the recognition it deserves.

P1532 is one of those roads you drive past 1 000 times in a rush to follow a straight line to some other less interesting place. It’s a road you want to drive, know you should drive and will wish you had driven a whole lot earlier when, finally, it gets hold of you and sucks you along to the coast.

From the N2, “Boggoms” is just 17km away, a scattering of mismatched holiday homes staring out at a swoosh of Indian Ocean called Vleesbaai. Old ladies with dachshunds look up from their knitting as you arrive. Men carrying fish - ing rods as big as cellphone masts make guttural greetings as they slipslop up from the beach. A crosshatch of roads cuts into the hillside, with not a single Coca-Cola sign in sight.

It’s just the ticket for those look ing to do extremely little with their weekend. But do not be deceived by this seemingly inconsequential clump of human Lego called Boggomsbaai. Behind the face-brick façade is one of the most remarkable stories ever told — and I don’t mean the story of how the town got its name, which has to do with a landowner, affectionately called Oom Boggom, who sounded a lot like a baboon.

The surprising truth about Boggomsbaai is that, scientifically speaking, it is the de facto cradle of human civilisation, situated on a stretch of coast where our earliest modern human ancestors first started acting like, well, humans. It may not look like much today, but 71 000 years ago, Boggoms was the hippest place on the planet, featuring radical new technology (fire), subversive counter-culture (rock paintings), and mysterious new weaponry (sharpened sticks). Anybody who was anybody in ancient history owned a hillside cave along the shellfish riviera now called Pinnacle Point, just a few minutes down the beach from Boggoms as the pterodactyl flies.

Since 2000, these caves have been studied, adding credence to the prevailing theory of modern human origin: mankind evolved just off the P1532, on a stretch of strangely familiar coast I’ve been driving past for over 20 years. No longer.

Boggoms is the perfect springboard to explore the wider Vleesbaai area, including the eponymous “t ow n ” a few kilometres to the east, which is really a gated community in the Boere Baroque style, looking onto a rocky promontory called Fransmanshoek. Here boardwalks offer easy access to sandy nooks and crannies. There are also hiking trails heading west to an equally spectacular dune belt. For more adventurous souls, there is a four-day Oystercatcher Trail, offering full immersion in this wavering world of starfish and shell middens.

Our two-night stay in a timber home a few blocks off the beach passed in a haze of sea breeze and birdsong, as intended. By the end of it we no longer flinched at unsolicited hellos from strangers, and waved back at passing motorists.

Visitors should also try to track down local businessman, conservationist and all-round trippy guy Fred Orban, one of a team spearheading a biosphere project that hopes to put the brakes on unsustainable coastal development.

Lastly, remember to bring your own provisions — the nearest shop is in Vleesbaai. Don’t buy their popcorn or Watermelon Chappies.

On the way home, I couldn’t help but see flaming PetroSA in a new light: we humans have been doing peculiar things in Boggomsbaai for close on 100 000 years. We celebrate new technology when it suits us, despise it when it gets in the way.

Maybe that old farmer who barked like a baboon was trying to tell us something about ourselves.