Unbarred in the Sperrgebiet - Free in the Forbidden area 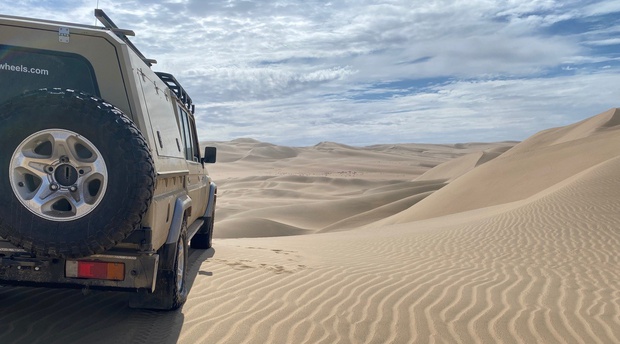 Despite ‘losing’ 3 clients and friends due to ridiculous PCR testing requirements, we started our trip in the capitol of Namibia, Windhoek.
Traveling from Windhoek, on the highveld(Hochland), we took the B2 main road towards Swakopmund, on the edge of the Namib desert and the Atlantic ocean.

The recent and ongoing rains in January and February had turned the normally tan coloured desert, into fields of green and greenish tinges…so approximately 40km’s from Swakopmund along the B2 road (near Rossing mountain), I decided to turn south towards the Swakopriver, just in case there was a trickle of water to see.

Cutting through the ever impressive and magnificent Moonlandscape, we reached the river a few km’s upstream from Oasis Goanikontes…and lo and behold, streams of strong flowing water in the riverbed! Now these words have often baffled my guests on their first visits to the Namib desert…as a river with water in it seems the most normal and natural occurrence…but not so for us in the desert!

In fact, the last time that the Swakopriver had actually broken through to the ocean at Swakopmund( mouth of the Swakop river), was 11 years ago in 2011.

The river eventually reached the ocean 5 days later on our return from the Sperrgebiet, of course to the joy and big fanfare of the local Swakopmunders – and other desert dwellers that raced down to this coastal town - to experience this rare event.

We spent a night in Swakopmund enjoying proper local cuisine and drinks at the Altstadt Restaurant run by the very charismatic Norbert Sadlowski.

Early the next morning we met with Jacques Delport our guide and owner of Uri Adventures, as well as his sidekick, Lizani.

Our destination – somewhere on the Forbidden coast near the erstwhile harbour and settlement of Meob Bay.

This meant traveling South from Walvisbay, along the coastline as much as we could. After entering the ‘permit required’ area after Paaltjies, we were on our own. Our Land Cruiser and Jacques’ Fortuner thundering along the beach, squeezed between towering dunes and the sea at Langewand (the Long Wall) dodging Cape fur seals, Cormorants and cold currents.

Eventually the tides caught up with us and soon after Sandwich Harbour, we had to turn inland to avoid becoming part of the Skeleton Coast and its wrecks.

Thus our adventure started its next level – with lots of urging and coaching from Jacques on the radio – we struggled up the dunes and down the slip faces…with lots of pauses in between, requiring assistance from our trusted ever calm Guide, to get us out of our Temporary Immobile positions.

We were not ‘stuck’… because, as Jacques drily commented: ‘only Land Rovers and dogs get stuck!’

The rest of the day we drove along the gravel plains, following the rusted old railway-type tracks and water pipes laid for the miners, to get water and supplies to them at the site of the *diamond mines and camps.

It is fascinating to see how incredibly hardy and determined these fortune seekers were, to literally scratch out a living in these barren surrounds.

We arrived at our camp South of Meob bay in the late afternoon. There are 2 permanent tented camp setups about 2 km apart. These permanent tented setups are very well equipped with proper beds (bring your own bedding) and the ablution facilities are top notch. Warm water showers and flush toilets. Unexpected luxury in the middle of nowhere. The camps are mere meters from the beach.

The ‘lounge and dining’ areas are well protected from the elements and lends itself to late nights around the fire.

All the meals are included in the package. Guests must bring their own drinks and snacks.

The next 3 days were spent exploring and conquering (attempting to) these massive dunes and dune belts. Testing our and the vehicles’ driving abilities to their absolute limits.

No roller coaster ride can equal the sheer fear and adrenaline spikes of driving in this immense dune belt and over these towering dunes of this Sea of Sand.

Taking a break between driving sessions, we would go down to the beach and catch enough fish in these nutrient rich Atlantic waters to keep us in fried, braaied, grilled, Sashimi’d fish until departure.

All the fishing gear and bait is included and of very good quality. Even the non-fishermen get hooked on these fishing excursions. Everyone vying and trying to catch the biggest, heaviest and most fish. Of course whatever we did not use we, released safely back in the ocean.

Driving back after 5 days was even more fun, as we were all ‘experienced’ desert drivers by now. We also visited the wrecks of the *Eduard Bohlen, stranded in 1908 and now far inland due to the receding coastline, as well as the *Shawnee.

On the way back we managed to (barely) beat the tide and sneak along the beach all the way to Sandwich harbour with a few touch and go moments where the waves managed to splash the vehicles.

Returning to civilization was a bit sad, as we had spent 5 days with no cell phone or Internet reception, and we had done and achieved things that 99,9% of people would never be able to experience. We truly felt slightly invincible and tougher that the rest!

The moonlandscape is a barren, undulating, rocky desert which was formed by the valleys of the Swakop river. Millions of years ago the river carved deep canyons into the granite rock, producing breathtaking geo-landscapes.

The discovery of diamonds in 1908 around Kolmanskuppe resulted in an uncontrollable diamond rush forcing the Government to establish the “Sperrgebiet” between 26-degree (Gibraltar) and the southern border stretching 100-kilometer inland. Prospectors were forced to turn northwards beyond the Sperrgebiet. This resulted in the discovery of diamonds at Spencer Bay in December 1908 and between Meob and the Conception Bay area (Diamond area no 2). This resulted in a total of 5000 diamond claims being registered in 1909 and hopeful prospectors tried their luck at Saddle Hill and Spencer Bay and via Swakopmund and Sandwich Harbour southwards towards Meob Bay. However, the small yields of diamonds from these claims resulted in only a few prospectors in the long term being successful.

Transporting of supplies and mine equipment was effected mainly from Swakopmund by ship.In the area between Conception Bay and Meob Bay the mining settlements of Holsatia, Charlottenfelder and Grillenberger were established.

During 1912/1913 a light railway from Conception Bay to Conception Water and an 80-kilometer pipeline linking the settlements were constructed.

After WW1 in 1920, activities recommenced in this area and only four companies operated in this area until De Beers purchased one after the other concession area in 1929. From old mining records it is clear that the average diamond found in this area was much smaller to those found south of Luderitzbucht. Operators made use of hand-operated movable sieve jigs, of which some are still visible today at the old mining settlements and were largely dependent on an Ovambo labour force.

In 1932 the price of diamonds dropped considerable and almost all known diamondiferous ground has been worked over at least once. The small diamonds left in the tailings of earlier workers made productions uneconomical.

Today only some remnants of the activities are visible and are deteriorating at an alarming rate. There are a limited quantity of hand-operated mining equipment left, two surf boats at Meob and ox-wagon north of Grillenberger giving some in-sight into the hardships endured by Indigenous Namibians and Early settlers to Namibia. 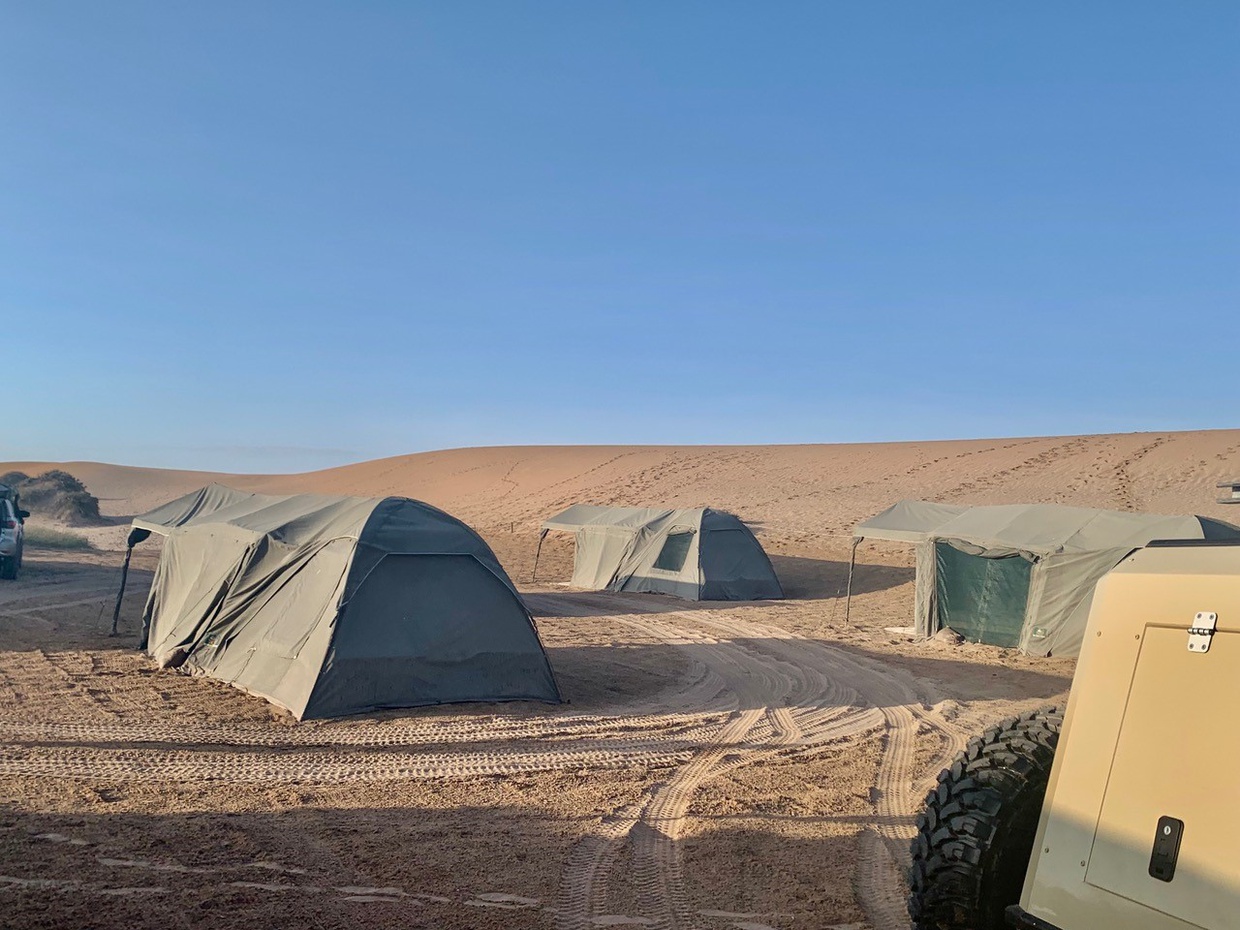 Part of the Namib Naukluft Park. The lagoon, salt pans and the bird sanctuary, which form the Walvis Bay Wetlands, are heralded as the single most important coastal wetlands of Southern Africa. It is one of five Ramsar sites in Namibia. Giant sand dunes run straight into the ocean, creating breath-taking sceneries and unique landscapes. Once a commercial fishing and trading port, Sandwich Harbour is now a RAMSAR site (Site no. 743) with magnificent wetland wilderness and devoid of any human settlement. Wedged between the sea and the Namib Dunes, this is one of Namibia's most important coastal wetlands, and is home to eight endangered species among the large numbers of wading birds.

Whilst on its way from Swakopmund to Table Bay, on 5 September 1909, a thick fog forced the Eduard Bohlen ship to run aground on the Namibian Skeleton Coast. 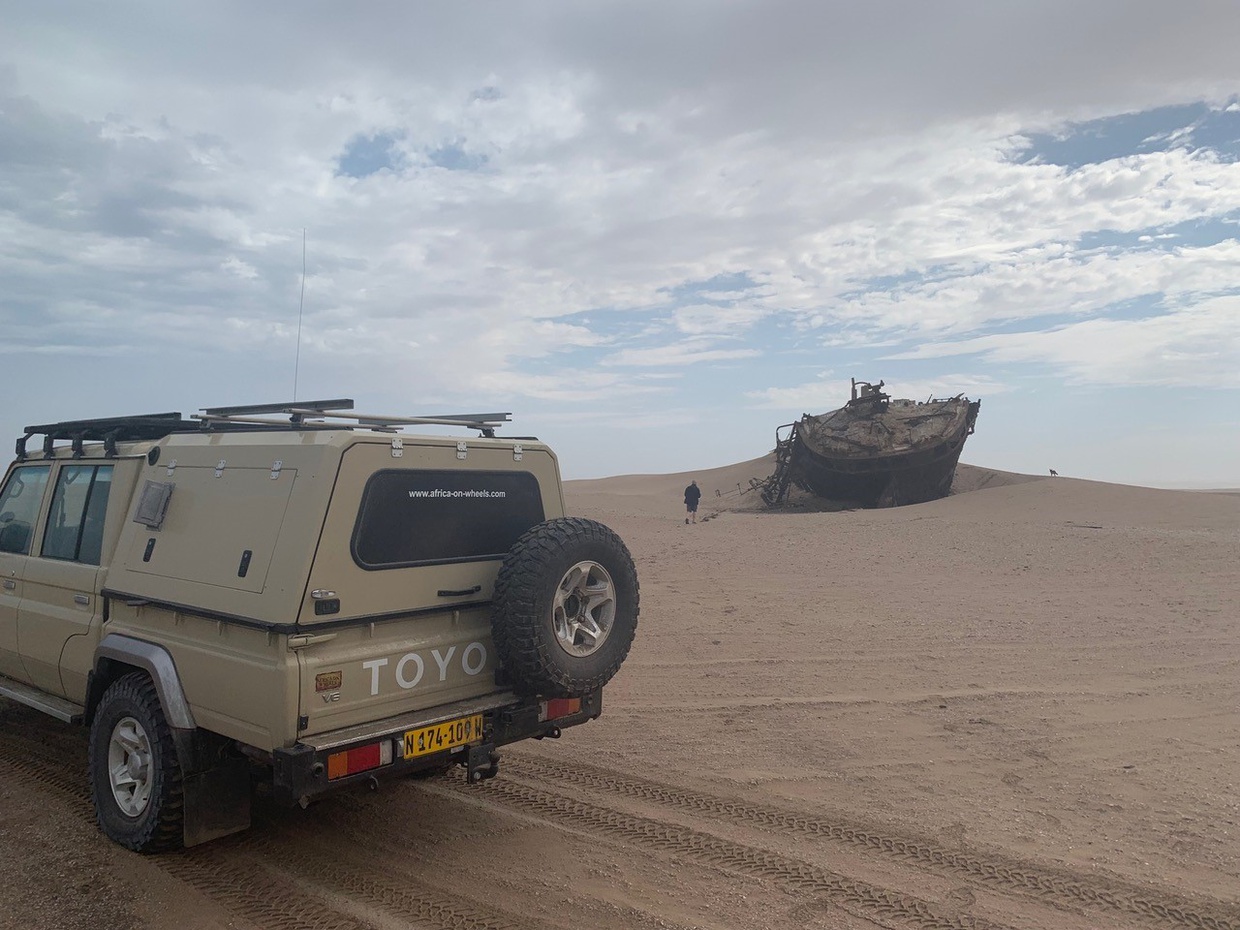 The Shawnee, an American vessel that wrecked on Feb. 16, 1976, sits in surf along the Skeleton Coast. Namibia’s coastline shifts so much that over the years the sands have most likely previously covered the wreck.

Shawnee ship ran aground in 1976 in Conception Bay on the Skeleton Coast of Namibia, about 8 miles north of the Wreck of Eduard Bohlen. 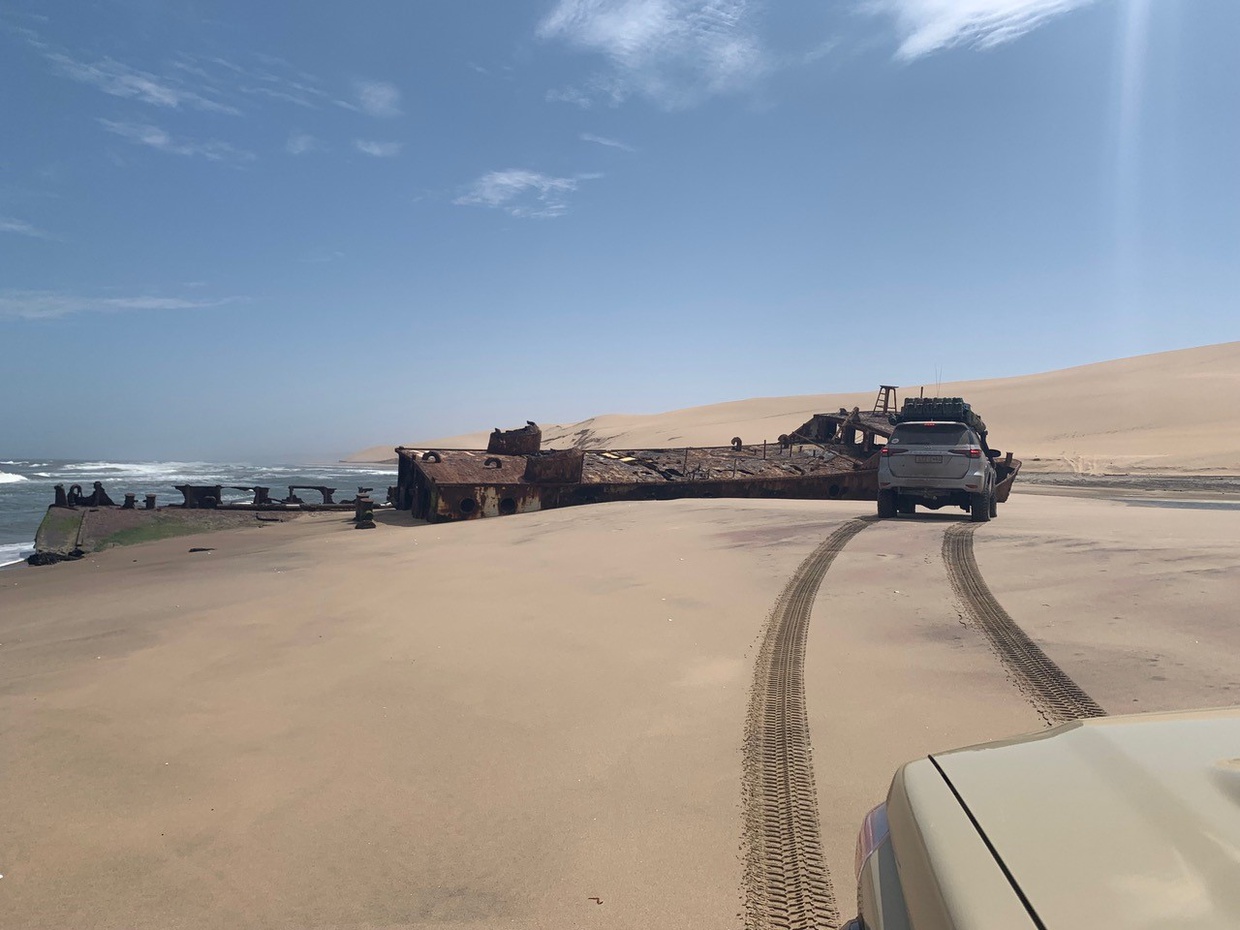 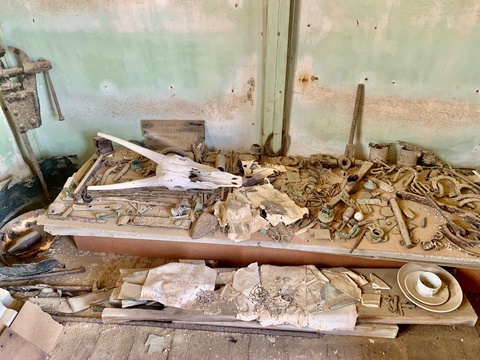 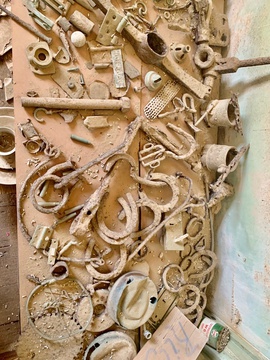 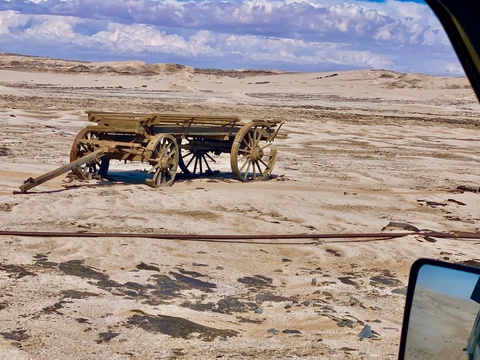 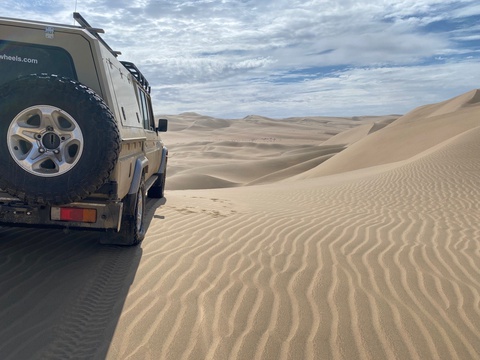 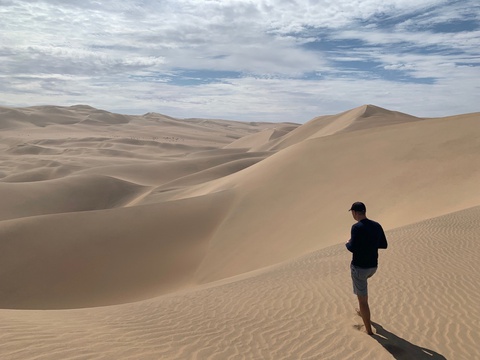 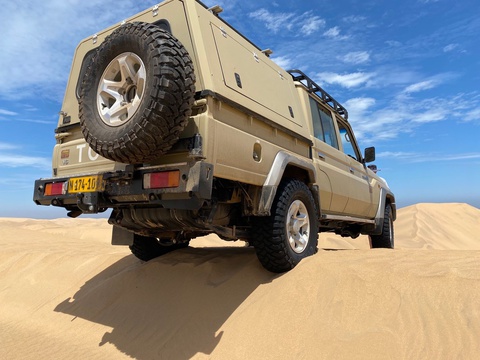 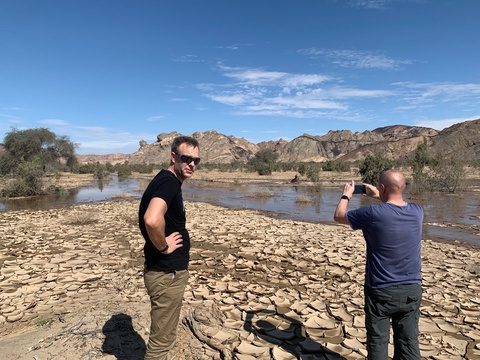 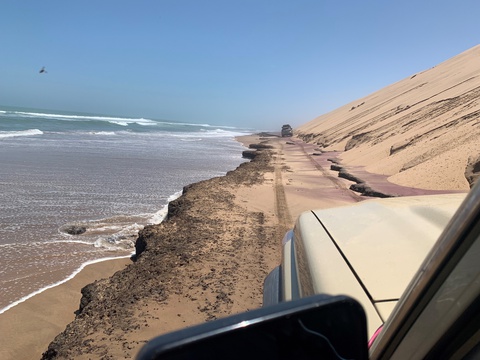